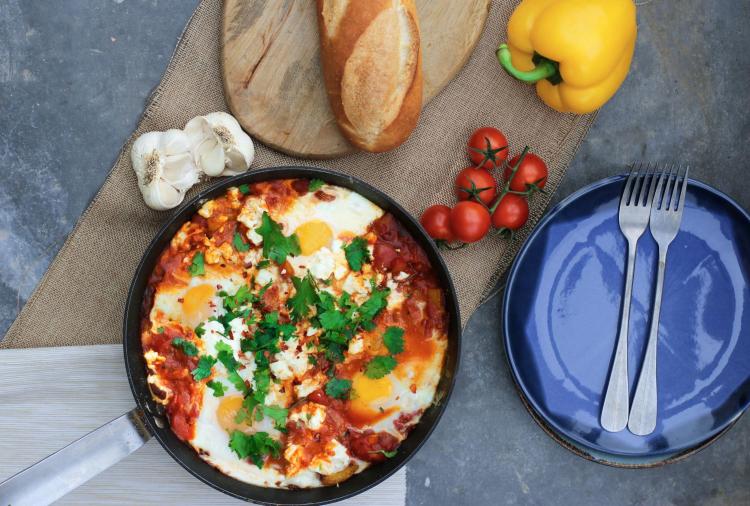 When I first arrived in Israel, one of the first words that I had to learn was “shakshuka.” Shakshuka? The name translates from Arabic to “mixed up” or “shaken.” Why was it so important that I learn the name of this dish in Israel? What I didn’t know was that shakshuka actually has an integral part of Israeli society. This shakshuka that I kept hearing everywhere held both cultural and historical significance. This, I learned, is still prevalent today in modern-day Israel.

You can find shakshuka almost anywhere in Israel. A popular breakfast and brunch dish, the majority of cafes and restaurants here serve it. Even my high school’s dining hall served it frequently. Made of eggs poached in a tomato sauce, shakshuka has turned into Israel's staple cuisine.

So, why is shakshuka so popular? The answer is simple: it’s delicious. Trust me, I’ve been eating it for years. Spiced with peppers, onion, garlic, and more, shakshuka is the perfect meal that can satisfy your cravings. It’s warm, filling, and tasty. And as a bonus, it’s easy and simple to cook.

Shakshuka has been prevalent in Mediterranean food culture for centuries. This is way before the establishment of the state of Israel. As you can tell, shakshuka isn’t actually of Israeli origin. Tunisian Jews brought shakshuka to Israel during their immigration. And, as you may have it, it has since become a tradition to eat shakshuka here in Israel.

There is some debate as to what is the true origin of shakshuka. Historians debate whether it came from North Africa, the Ottoman Empire, or somewhere else in the Middle East. What’s for sure, though, is that Israel has taken a monopoly on the dish and that its popularity is only rising. Now, there are variations of the dish floating around that may even have meat, spinach, cheese, or all three.

Shakshuka goes to show how a single dish can affect people in so many different ways. It represents the hodgepodge of cultural cuisines that have come to be appreciated here in Israel. It is also a reminder of good times, like meeting with a good friend for brunch over a steaming hot skillet of shakshuka at your favorite cafe. Or, sitting with family on a Shabbat (Saturday) morning, dipping bread into the remnants of the leftover sauce. Whatever it may be, shakshuka influences everyday Israeli life for the better.
#Israel